ACS Diversity & Inclusion: Leadership equality during and beyond disruption

Australia finds itself in a fortunate yet precarious position.

While the world is still in a pandemic situation, the ACT Government is predicting economic growth at an average of 2.7% for the next four years in its budget handed down last Wednesday.  In addition, the 2020-21 jobs growth forecast is 4% and the ACT is likely to continue to have Australia’s lowest unemployment and underemployment rates.

Fantastic! However, don't forget the 10,000 jobs that were initially lost in the Territory were from vulnerable sectors including tourism, hospitality. Women in particular suffered badly from the job losses. Another COVID wave could put these jobs in danger again.

The ACT Government is right that we need to build a prosperous economy and community through investment in health, education, infrastructure and supporting those of our community that need us most.

The World Economic Forum has suggested that perhaps the 21st century could go down in the history books as “era of the sustainable economy”.  The budget priority areas identified by the ACT Government are linked to a sustainable economy and it will be a digital and technology workforce that delivers them.

The ACS 2020 Digital Pulse report predicts that Australia will have over one million technology workers, up from the 772,175 workers recorded in 2019.  The expected average annual growth rate for the ACT is the highest of all the states and territories.  So where will this additional workforce come from?

Women are underrepresented in the ICT sector and remains at 29% of the ICT workforce so there is an opportunity here.  But how inclusive is our sector?  Is our culture one that attracts, retains and promotes women in the sector especially as they have been more affected by COVID. 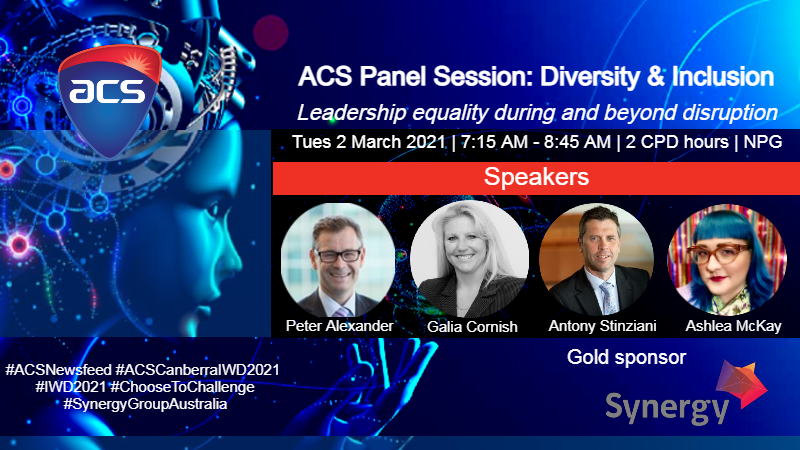 Join Canberran diversity and inclusion leaders in a panel discussion on how the ICT sector can benefit from even greater attraction and advancement of women in the sector and tips on how not miss out of 50% of the talent pool.